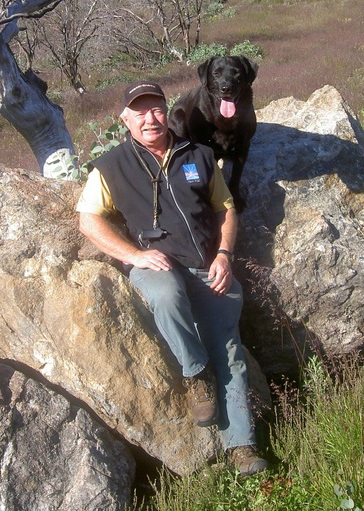 Many may not realise my background in retrieving trials goes back nearly 40 years. In 1978 I trialled a Weimaraner for a period of approximately 12 months. After this  initial exposure my next contact with retrieving trials was 14 years later when I gained possession of my first Labrador Retriever in 1992.

My first Labrador Retriever was “Tess” (Rt Ch Firefield Yankee Belle CM) and I can say Tess taught me much of what I now know about trialling. She was such a brilliant natural retriever she was able to overcome most of my short comings in the sport to get the results she ultimately obtained. Tess ended up winning over 20 All Age trials, two State Championships and a second in a National Championship as well as finishing in two other National Championships. Right up until her eventual passing at the age of almost 17 years she was still her own boss as far as she was concerned. Tess was accepted onto the ANKC Field and Retrieving Trial Hall of Fame in 2009.

My second Labrador was Tess’ son “Tike” (Gr Rt Ch Reveirter Jet Kite). Tike, although a totally different dog and very soft, was equally successful in retrieving trials. Tike was still running competitively in retrieving trials at the age of almost 12 years and gained over 350 championship points. Tike won four State Championships, placed in five National Championships and placed in a total of 25 of the 38 Retrieving Trial Championships in which he competed. Tike gained entry to the ANKC Field and Retrieving Trial Hall of Fame in 2010.

Trialling has given me many new friendships including meeting my wife Kate (who I proceeded to put out of a trial before her dog had retrieved a bird on the first occasion she had trialled). In addition to my own dogs I have assisted Kate in the training of her Flatcoated Retriever, Pax, Ch Lainston St Charity NRD.  In addition to working in partnership with my dogs it is the friendship and camaraderie at trials that has been major attraction to me in this which is my major hobby.

The trialling history of the dogs I have competed with and am currently training and trialling can be found by clicking on the links below: