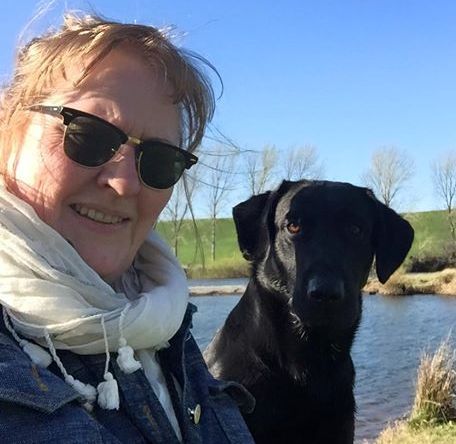 My first introduction to dogs was as a baby as my parents had their first dog, a yellow Labrador Retriever named Honey, who was with them six months before I was born.  Honey was mine and my sisters constant companion until we left to emigrate to Australia when I was ten years old.  Honey stayed in the UK with my grandparents so on arrival in Australia we purchased our second Labrador, also called Honey, followed by Cindy and then my parents changed allegiance to Golden Retrievers, Tess, another Honey and Chai who was then joined by Ebony, a black Labrador.

My sister and her husband, went to live in the UK for a period of two years, where at their local pub they were introduced to the Flat Coated Retriever. On their return to Australia they decided that that was to be the breed for them. After purchasing my first home in 1995, they gave me Pax, Ch Lainston St Charity ET NRD, who became the first dog that lived solely with me.

Whilst I had shown a couple of the families Golden Retrievers in previous years, with Pax I entered the world of dog showing. Pax obtained her Show title followed by her Endurance Test title. It was after this and because of my involvement with the Gundog Club of South Australia I was introduced to Retrieving Trials. It was soon very apparent that this was to be Pax’s greatest love.  Whilst she tolerated going into the show ring as soon as we went into a paddock at a retrieving trial this was where she really wanted to be.

In May 1999, Pax and I entered our first retrieving trial at Mulgundawa, South Australia. Unfortunately it was not to be a successful venture as Pax failed to pick up a bird and with the consent of the judge I withdrew her from competition. The judge was incredibly encouraging of both of us, so much so that eighteen months later I married him, Noel Eltringham.

Marrying Noel meant a move to Victoria and with his help and encouragement Pax and I went on to achieve her Novice Retrieving Dog (NRD) title. We ran in Restricted trials but Pax’s desire to retrieve made her somewhat deaf  to my desire to work with her to retrieve what she was supposed to retrieve!!
We, Noel and I, strongly believe in giving back to the activities that we are involved in so in 2007 I applied and was accepted into the Retrieving Trial judge’s scheme and became a Novice judge in December 2007. I have continued with my judging and have been accredited to Championship Level and also accredited to judge Retrieving Ability Tests for Gundogs.


Noel and I work together training our dogs (although now that Noel is retired and I’m still working) he is doing larger proportion of the training. Whilst we have the ability to run any of our dogs I have primarily trialled the following dogs to various levels in retrieving, to read of my successes (and failures) please click on the link: