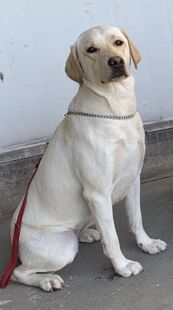 Reveirter Abhainn Liffey “Lilly” was born on 4 December 2017 and her father GR RT Ch Reveirter Jet Kite "Tike" and her mother is Huntogun Gun Bonnie Lass RRD "Tait". Lilly’s first season of trialling has been rather disjointed with Noel being incapacitated with hip and ankle surgery.

“Lilly’s” trial career commenced on 20 April 2019 in a Novice Stake conducted by the Gippsland Retrieving Club at Hearts Morass, Sale. While unsuccessful in her first two Novice Stakes Lilly has now won two Novice Stakes and placed in a further four Novice Stakes up to the end of 2019 although being trialled sparingly.

In addition to trialling Lilly has been working extensively as a Service and Therapy Dog both in Victoria and South Australia working with individual clients and within various schools programs in Victoria. Lilly has also spent time at La Trobe University (Bundoora Campus) during orientation weeks where she has met many students settling into university life receiving lots of love and pats and photos being taken of her.